Tech Fair in the Heights 2017 ​Success

“If you want something done, ask a busy person to do it. The more things you do, the more you can do.” Lucille Ball.

Equipped by the power blissful ignorance, Tech Fair in the Heights began as a big “What-if” followed by a storm of exciting ideas, bounced around by a group of STEM professionals at the Union Square Wework. We had set our goals high, to deliver an event that our community desperately needed, a tech fair designed to inspire the next generation of tech leaders right on our turf.

An hour after the initial brainstorming phase, we began to realize how ridiculously hard, scary and expensive this event was coming to be. We quickly took stock of what we had, a newly formed 501-C3, American Association of Latinos in STEM, approximately $5,500 dollars of members contribution and absolutely no intentions of scaling back an inch. We wanted this event to be fantabulous, big and open to the public. Picture Dreamforce conference meets street block party, and I wasn’t going to settle for less.

After nearly three hours of delegating tasks, our president Francisco Diaz, Senior Manager at Con Edison turned to me and said, “Mike, you’ve been working in tech for a while, you know a lot of people, I’m sure that you can raise 50K from friends with no problem.” Which I replied, “How about we all go around asking friends for 50K, and maybe we will end up with 300K” which at this point the room erupted with a loud cheer of excitement! Meeting adjourn, we had a solid funding strategy, it was midnight and we had a date for the event June 3rd, 2017.

Fast forward 45 days before the event, we had promoted the event through 20 schools with an estimated turnout of 1500 students and parents. At this point, we had dwindled our funds to approximately $1,400 dollars, no funding opportunities on sight and our jobs and business responsibilities pressing for all our time.

It didn’t look good, at all.

What happened next is a result of exploring beyond our limiting beliefs. My VP Chris Martinez gets a call from BMW of North America telling us that they will be joining us, and that’s pretty much all that I needed to hear. BMW validated our efforts, it fueled us with hope and excitement. That day we set out to call every living soul in our network and haunt them for support. It looked like a scene from the show Apprentice. My Whatsapp began to light up with great news; Spectrum is in, Con Edison, Microsoft, Oneworld Virtual Reality, Atax, Classic Car Club, Waste Harvest, New York Life, media coverage, food, drinks, independent techies donated new computers, lights, stage, DJ, and amazing volunteers. True life savers!

For the record never once I doubted that we could pull this off.

Over the years, I’ve learned that fears are signals of new and exciting experiences filled with possibilities. It turns out that what we fear is the unknown, once I learned to embrace that mindset, I’ve become nearly unstoppable. Sounds holistic right? Well, trust a serial risk-taker like me, there is no secret science to success, say it, repeat it and believe it, and it will happen for you too.

I encourage all of you to test your limiting beliefs under a non-profit platform. It’s liberating and safe to try new ideas without risking large sums of money or your precious reputation if you care about that. Nobody can’t stop you from giving your time and talent especially when you are asking to give to others.

The event came to an end, we inspired over 500 kids in attendance, and we are proud and ready to do it again in 2018. 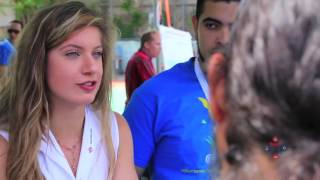